Let’s think about war and its costs. What we as an (American) society regard as honorable is the willingness to give one’s life in service of a higher cause. Those who conscientiously object don’t object to the prospect of giving their lives, but they don’t agree with the means (killing) used to attain the goal. Suppose we broadly and nobly call the goal “maintaining freedom.” The U.S. started two wars in the Middle East without having been attacked by those countries it invaded and called it maintaining freedom. Post-World War II, the U.S. has conflated “maintaining freedom” (Korea, Vietnam, Gulf.1 and Gulf.2, plus other police actions) with its aggressive military action in and against smaller countries. We stepped in to all these places. No wonder America looks like the Great Imperial Satan. We butt in a lot militarily. Russia did this recently with Ukraine and was economically sanctioned. But the U.S. is too big to sanction. From outside our frame of reference, this makes no sense.

Let’s think about war and its costs. Here in the U.S. we have veterans, usually coming from a certain socioeconomic class. We pay for war; we pay for those who have fought it after they are done fighting it as well as during the fighting. We pay and pay for our “wounded warriors” whom sophisticated medicine saves. The Congressional Budget Office notes that spending on veterans’ disability benefits tripled between 2000 and 2013.[1] We pay “opportunity costs”: things we don’t get because we have spent dollars on defense. So the size of our defense budget, which in 2014 exceeded $610 billion, also exceeded the defense spending of the next seven nations combined[2] (China, Russia, Saudi Arabia, France, UK, India, Germany), which spent $601 billion. As I drive to Indiana, I see interstate roads crumbling as public monies go to provide for a bloated common defense. Our investment in railroad infrastructure lags well behind that of Japan and France (I think I remember reading China’s as well but cannot find the reference.) From outside our frame of reference, this makes no sense.

Let’s think about war and its costs. The human costs are incalculable. Let’s just keep it to World War II: 60 million military and civilian dead, equaling 3 percent of the world’s population in 1939. Random freakish facts[3]: the number of Polish dead – remember that the war began when Germany invaded Poland – exceeded the number of German military dead. 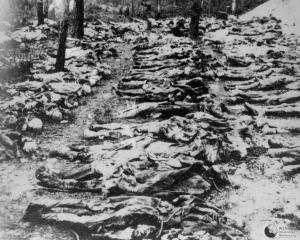 Depending on which estimates you accept, by some measures half the casualties of war were in the then-Soviet Union. One-third of Japan’s casualties were civilians. UK casualties were only slightly larger than those of the United States, and the UK was involved for two additional years. The greatest numerical losses were sustained by the Soviet Union and China. This is not a blur of numbers. 60 million dead is 60 million grieving mothers, unless of course the mothers were among the casualties. From any frame of reference, this makes no sense.

[3] Wikipedia is good for something: http://en.wikipedia.org/wiki/World_War_II_casualties