My husband left me, and I drove him to it.

I dropped him off at the airport this afternoon. He is going to Spain to do the entire Camino de Santiago and is starting tomorrow. He will wake up over the ocean or, if he is lucky, in the Madrid airport at the end of the flight. 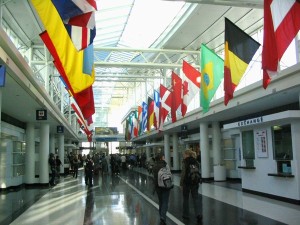 I am back at home; the house is not empty. One of the cats is curling up for his evening nap. But the house feels quieter. No big running shoes waiting by the door. The bed looks bigger. I am noticing something catch in my throat every so often.

I must explain: I have always been the one doing the leaving. I traveled to Europe in 2007 and 2011. I have been in nine short residencies at seminary in Indiana since 2011. I used to travel for business several times a year. I had a three-month internship in Wisconsin right after we married and before that a three-month academic quarter in Washington.

My husband has never been over salt water. This is his first passport that he has actually used. He usually stays home and feeds the cats and mows the grass (or shovels the snow) and brings in the mail. Yesterday he showed me how to use our lawn mower; he will be gone for six weeks and the grass does tend to grow in spring. I need to feed the bird tonight; I’ve never changed the paper in the cage and it needs changing. I already forgot to feed the fish.

Householding has been a two-person operation for us since 1983. I’m not expecting to need to turn off the main water valve for the house in the next six weeks, though for some reason my husband showed me how to do so. I’m more worried about falling asleep alone than flooding.

Six weeks is a while. The cherry trees are in bloom in the back yard, and he saw them before leaving. I was looking at the honey locust, which has not leafed out much, and our new hackberry. The downy woodpecker was rapping loudly on the locust trunk this morning. These later-leafing trees will be suited up for the season by the time of his return. I can be his eyes; he is usually mine, watching movies in my absence. I hope I can get into the Netflix account.

Yes, I am joining him next month in Astorga so we can do a part of this together. But he is now on the road, literally, and I am checking email, a pilgrim’s tether.

One thought on “Left Behind”